We have decided to launch a poll regarding OSI casting after trying it out Felucca-wide for some time now. There will also be an in-game poll for which you can cast your vote upon login.

Votes on the forums, and in-game, will be recorded anonymously. If you wish, you can explain your vote in more detail by replying to this thread. These posts will only be visible to staff members.

Explanation of the different options: The polls will close in 7 days.
Eos
UOGDemise - Administrator

Thank you for your continued support of UOG: Demise.
Yumiako, Scripted U IRL, Mr Straitions and 15 others like this.
Top

Firstly, we would like to thank everyone who participated in the polls and/or gave us their detailed opinion, helping us gauge the shard's opinion on the matter and making our decision. Thank you! 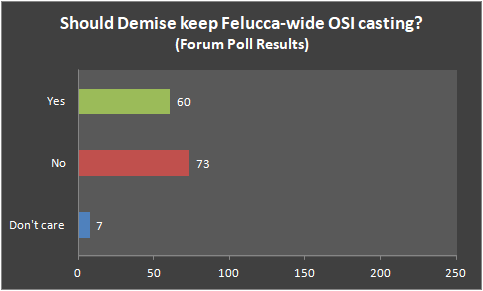 For these results, we only counted votes from forum accounts registered before the poll was created. This was done to correct for players creating new accounts to get another vote. Therefore, it differs slightly from the results displayed at the top of this thread.

Winning option: No (with a 13 votes majority compared to Yes) 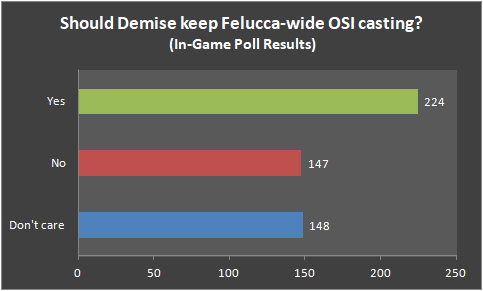 The in-game poll allowed one vote per IP, and the results above were filtered to correct for proxies and dynamic IPs allowing people to vote multiple times (these were merged into single votes). We also removed votes from IP addresses that did not have at least one 30+ day old account. Though the filtering process removed a good number of votes, the outcome was not changed significantly.

Winning option: Yes (with a 77 votes majority compared to No)

Based on the votes above (both in-game and on the forums), and our judgement as staff, we have decided to keep Felucca-wide OSI casting.

We will continue to look into tweaking the casting as necessary, though since the poll's creation two key issues have already been corrected (disrupt overcasting and timer accuracy). Something we are planning to look at in the future is reducing the overcasting trigger slightly to further improve usability.

Furthermore, the existence of two different casting systems for Felucca and Trammel facets is not something we intend to keep long-term. Eventually, we will look into unifying the facets under the same casting mechanics, once we feel comfortable the mechanics have been perfected for general use.
Eos
UOGDemise - Administrator

Thank you for your continued support of UOG: Demise.
Calvin, Fujiko, isterico and 8 others like this.
Top
Locked
2 posts • Page 1 of 1